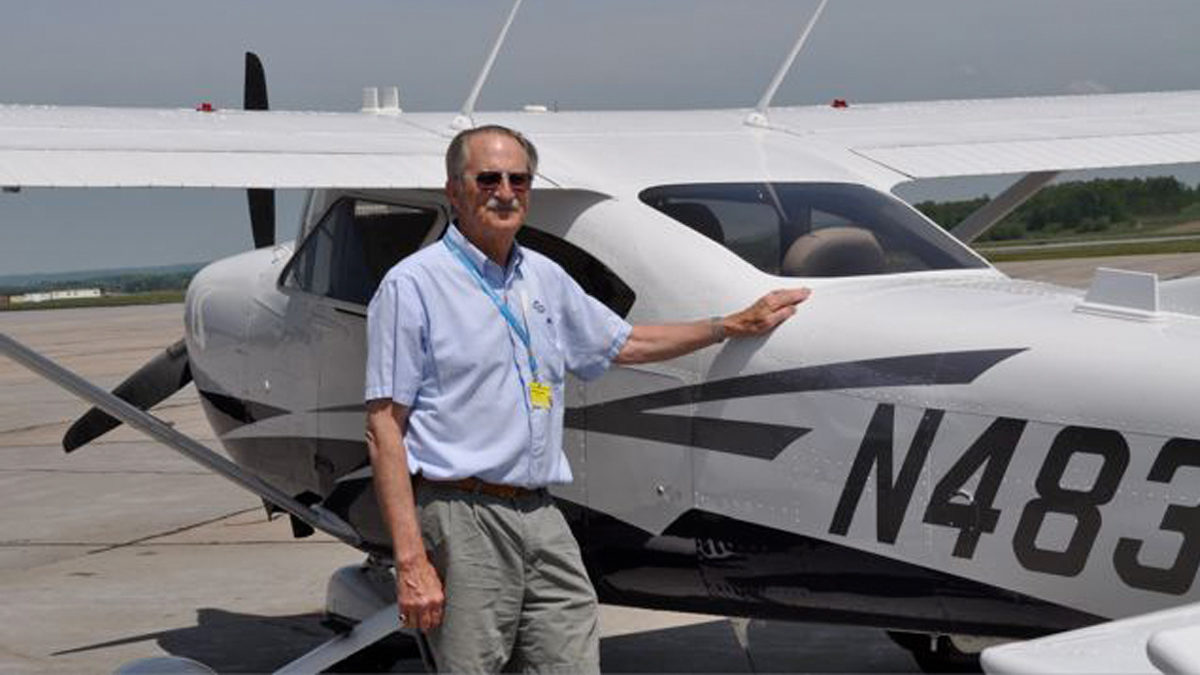 Bob Keller is a pilot with LightHawk, a non-profit that connects volunteer pilots with conservation organizations and uses aviation to enhance on-the-ground conservation work. Since 1994, Keller has volunteered to fly many hundreds of flights to check on easements in New Hampshire, look for signs of environmental stress along coastal areas in Maine, and survey the Green Mountain National Forest in Vermont. In 2005, he and his wife retired to their woodland property in Boonville, New York, in the western Adirondacks, where he also chairs the Tug Hill Tomorrow Land Trust.

I’d always loved the idea of flying. When I was in my late 40s, a friend of mine learned how to fly, and I thought – if he can do it, I can do it. I started flying, and I loved it so much I decided to become a flight instructor. I like flying most if there’s a purpose to it – whether I’m instructing somebody, doing a flight review, or doing environmental flying. I started in 1994 with Northern Wings, which merged with LightHawk about 10 years later. It allows me to use my flying skills to help with environmental issues, and help protect the northern forests from Tug Hill to Maine. 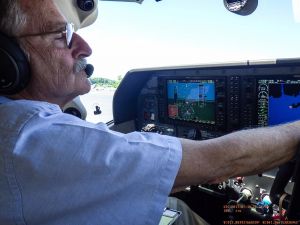 “Environmental flying” is flying for some sort of natural science reason. Somebody’s come to LightHawk and said, “Gee, we’d really like to see this from the air.” Or they have a project they’d like to pursue, and they need to build support, so they’d like to take up people from the media or potential funders. That’s one aspect of it. The other aspect is wildlife monitoring. One year I did a flight with Audubon. We flew the Connecticut River from Fourth Connecticut Lake all the way to the Massachusetts border looking for osprey and bald eagle nests along the river. I’ve done flights for eel grass surveys in Cape Cod Bay and flights in Pennsylvania looking at the impact of hydrofracking on surrounding lands.

I’ve done a series of flights with The Nature Conservancy in Vermont, where their development people bring up large donors to show them projects they’re seeking funding for. People get in the air, they see the landscape, they see the adjoining lands – and maybe it becomes clear why protecting that parcel is so important. In the 1990s I spent about five days every year flying over every easement and property held by the Society for the Protection of New Hampshire Forests.

Flying is flying. But when you’re taking photographers or someone who’s looking for something specific, sometimes you’re down a little lower than you might otherwise be flying. In New Hampshire, for instance, some of those easements are on the lee of the White Mountains, you’ve got to be cognizant of the wind. It can be technically more advanced flying. The skills need to be sharper, the training better. That’s why LightHawk has minimum requirements for people to become volunteer pilots.

I grew up in a New Jersey suburb of New York City, but my grandparents had an old 1,000-acre farm in northwest New Jersey that was about 80 percent forest, and I spent lots of time there growing up. At age 10 I started spending my summers at a boys camp on Panther Pond in Raymond, Maine. Just about any place in the woods seemed special. Northern softwood and mixed forests have a special smell and feel that always bring me back to my summers in Maine.

Growing up in suburban New Jersey, I saw how the town I lived in became more developed, how more land was turned into housing. Then we lived in Saratoga County in the town of Charlton for 30 years. Saratoga County, for a number of years, back in the ’80s, was the fastest-growing county in the state. I just saw land disappear. You had to travel farther and farther just to get away, so to speak. And the decline in bird species in the last 20-30 years – all these things that as a kid you’d see a lot of, and you just don’t see anymore. You need to try to protect what’s left. Conservation just makes sense.

Our property in Boonville borders state forest, as well as state forest preserve land, so this property is on the connectivity corridor between Tug Hill and the Adirondacks. We have a pond here, about 10 acres of water. The stream was originally dammed up in the 1860s, so the pond has been here so long it looks natural. The stream was dammed for probably a small lumber mill or something. Back in those days, throughout the Northeast, there were small mills on any sort of stream, for the grinding of grain or the sawing of wood or whatever.

Because of the pond, we get waterfowl, both spring and fall, as they migrate through. This year we have a pair of hooded mergansers nesting. We’ve also seen wood duck, mallards, geese, bufflehead migrating through. This time of year we see kingfisher, great blue heron, an occasional osprey will come by to fish. We have black bear, fisher, weasel, bobcat, coyotes, foxes. We regularly have otter moving through. I had a moose on the pond the other day, first one I’ve seen in 30 years. There are lots of birds nesting here, and just quite a diversity of wildlife. It reinforces the idea that you need large areas of contiguous forestland that support healthy populations.

We have conservation easements on all the land here, so it will never be developed. Our conservation easements do allow commercial timber harvests based on an approved, sustainable management plan. I’m a big believer in not taking forestland out of production. We have a total of over 300 acres. We haven’t done any harvests, but we’re wondering, do we harvest ash now, with emerald ash borer on its way?

I believe very strongly in working lands, whether it’s farmland or working forestland, because I think it’s important to northern New England and New York. So much of the culture here was based on forestry. When the big timber companies started selling off timber lands, some of that land was subdivided. As soon as you start dividing up large tracts of land, that land usually goes out of production. The timber industry is still fairly important, and if there’s no land available for timber harvest, you’ll basically eliminate what’s left of that industry. I believe that we shouldn’t preserve everything and destroy the culture while we’re doing it. If you do sustainable harvest forestry properly, you’ll have a forest, you’ll have jobs.

The Tug Hill Tomorrow Land Trust has about 20,000 acres under conservation easement. We’re working more with farmlands now, primarily dairy farms, utilizing state funding to try to help buy development rights so farmers can stay in farming or pass the farm onto the next generation. We do a lot of educational programs. If we don’t educate younger people about the value of the outdoors, they won’t care.

We’ve had our property here for about 31 years. When we retired, we moved here full time. There’s more snow and more trees – and fewer people. My favorite time in the woods is winter on snowshoes. It’s just easier to get around. You can see farther when you’re walking. And it’s just so quiet. You don’t move fast on snowshoes, but you can cover areas that might be wetland or boggy, and in the summer you have to walk around. In winter you can just walk across. You don’t see a lot of wildlife, but what you do see is really great.

I find both flying above and walking in the woods very relaxing and a nice getaway from a too-busy world. In a forest the trees, from young seedlings to old snags, give you a view of life. And, of course, the forest provides a home for so much more life.

This interview is part of a bi-weekly series exploring the many ways that people’s lives connect to northeastern forests. It is edited by Meghan McCarthy McPhaul and made possible through generous support from the Larsen Fund.